It’s a fact familiar to all who know me that I can’t walk past a second hand book sale. There’s something about the promise of worn gems to be discovered that always seems far more intriguing than browsing new books. I recently, found myself in Blakeney, a small village on the North Norfolk coast, which has recently become home to my parents-in-law. Taking a morning stroll down to the harbour I passed by a man tying a hand-written sign at the entrance to a lane. On the cardboard sign, in black marker: ‘Used Book Sale’. Asking what time the sale opened he told me, ‘Well it’s pretty much always open as long as I’ve put it out’. Looking past him down the lane I saw about half a dozen cardboard boxes of books arranged on a couple of trellis tables sitting outside a cottage, alongside a table hosting various jars of jam. As I wandered down the lane he said, ‘The jams we have to set a price for but for the books just leave whatever you think is a fair donation’. 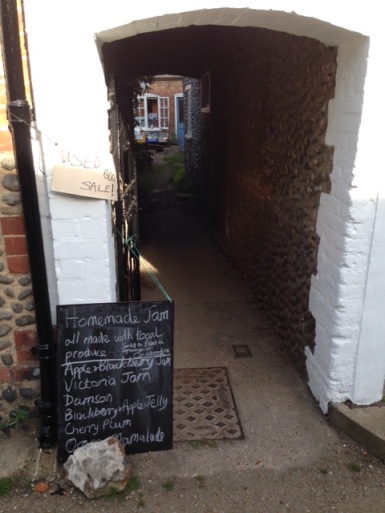 The accomplished second hand book browser becomes adept at sorting the wheat from the chaff. Large hardbacks are generally non-fiction, from Top Gear annuals, to Morris Minor repair books, to Readers Digest gardening almanacs. My business here is fiction, so I turn away from those awkward, oversized boards to the tightly packed boxes of paperbacks; worn, faded spines giving hints as to both decade and genre. It is a scientifically proven fact that no matter the size of a used book sale, there will always be at least one copy of Bridget Jones’s Diary. Here we have two. Plus a copy of the follow-up, Bridget Jones: The Edge of Reason. The second hand devotee also tends towards altruism for other such perusers. I move The Edge of Reason, placing it beside a copy of the original, surmising that someone familiar with the original may then be tempted by the sequel, or that some fan may wish to buy the two together. In my browsing I also spot several other second hand standards: Stephen King, Dean Koontz, Jackie Collins, Maeve Binchy, John Grisham, John le Carré.

A relatively recent addition to the used book sale repertoire is, unsurprisingly, Nordic noir. I spot a Henning Mankell and read the blurb. It doesn’t sound like one I have already read. But perhaps I’ve seen an adaptation on TV? I keep the book in my hand and continue browsing. This particular sale has an interesting mix of popular and genre fiction alongside a fair number of canonical authors, including Henry Fielding, Gustave Flaubert and Henry James. I see a slim volume wedged between two paperback heavyweights. Teasing it out I find it to be a short reference to the works of Nietzsche. Now Nietzsche is someone I’ve never been able to read more than a few pages of at a sitting. I figure this intermediary may be able to elucidate for me. And who wouldn’t want an introduction to the works of Nietzche? That’s bound to come in handy.

Turning to another box I run my fingers over the spines, sensing as I do the previous readers, the previous browsers. Attempting to pick up titles at random (is there such a thing in the subtle process of book browsing?) I pore over detective fiction, potboilers, romances, fantasy, ‘chick lit’, thrillers, legal dramas. My eye alights on a familiar name: Mary Stewart. With a little thrill of excitement I pick up the book and turn it over in my hands, knowing this is one I have not yet read: This Rough Magic. This 1960s book has been given a 1980s makeover, with a watercolour of bold blue skies and bright white Cypriot domes on the cover. One of the joys of second hand books is their over layering of time, and times past. A reader in 2014 buys a book once owned by a reader in 1988, republished many years after its original publication in 1964. In this way Mary Stewart, and countless other middlebrow authors speak across decades. I consider my haul, pleased with the three books in my hand. Not every book sale gleans such excellent results. The Mary Stewart is without doubt the jewel in the crown. I have been working my way through Stewart’s oeuvre for about a year now. The sense of serendipity imbues this find with special significance. A year ago the name would not have caught my eye. I doubt I would have picked up this book. I briefly muse on how many Mary Stewarts my eye must have skipped over in the past. Of course I could simply go to Amazon and order all the Mary Stewarts I haven’t read. Or pop into Waterstones and buy them in their newly released re-editions. But where’s the fun in that? Where’s the sense of a find?

Coronet edition of This Rough Magic, 1988. Photo of author’s copy.

The selection amongst these half a dozen boxes is obviously incomparable to even the smallest Waterstones store. But the possibilities somehow seem so much greater. There is no uniformity and – with the exception of good old Bridget – no repetition of titles. So different from the strategically placed stacks of new releases that greet you as walk into a high street bookshop. No ‘Staff Recommendations’ to guide your purchase. Only the subtle codes that lead you to pick up this and ignore that. Only the knowledge that someone, somewhere, has owned these books before. No doubt some have adorned bookshelves unread, until a final insistence on a clear-out propelled them by some means to this random setting down a Norfolk lane. But most bear the scuffs, cracked spines and turned down pages that speak of books held, put down, picked up, read, reread, carted around in handbags, suitcases and backpacks. And perhaps some of them bear the hopes of the owner; that someone, somewhere, perhaps a young woman in Norfolk visiting her in-laws for the weekend, will pick them up, take them home, and read.

pushing sound studies into the red since 2009

Digital Stories About Reading in the Digital Age

All the books of our lives

Sharing the collections of the Museum of Childhood, Edinburgh

A Conference Hosted by the English Department at Taipei Tech: May 27–28, 2016